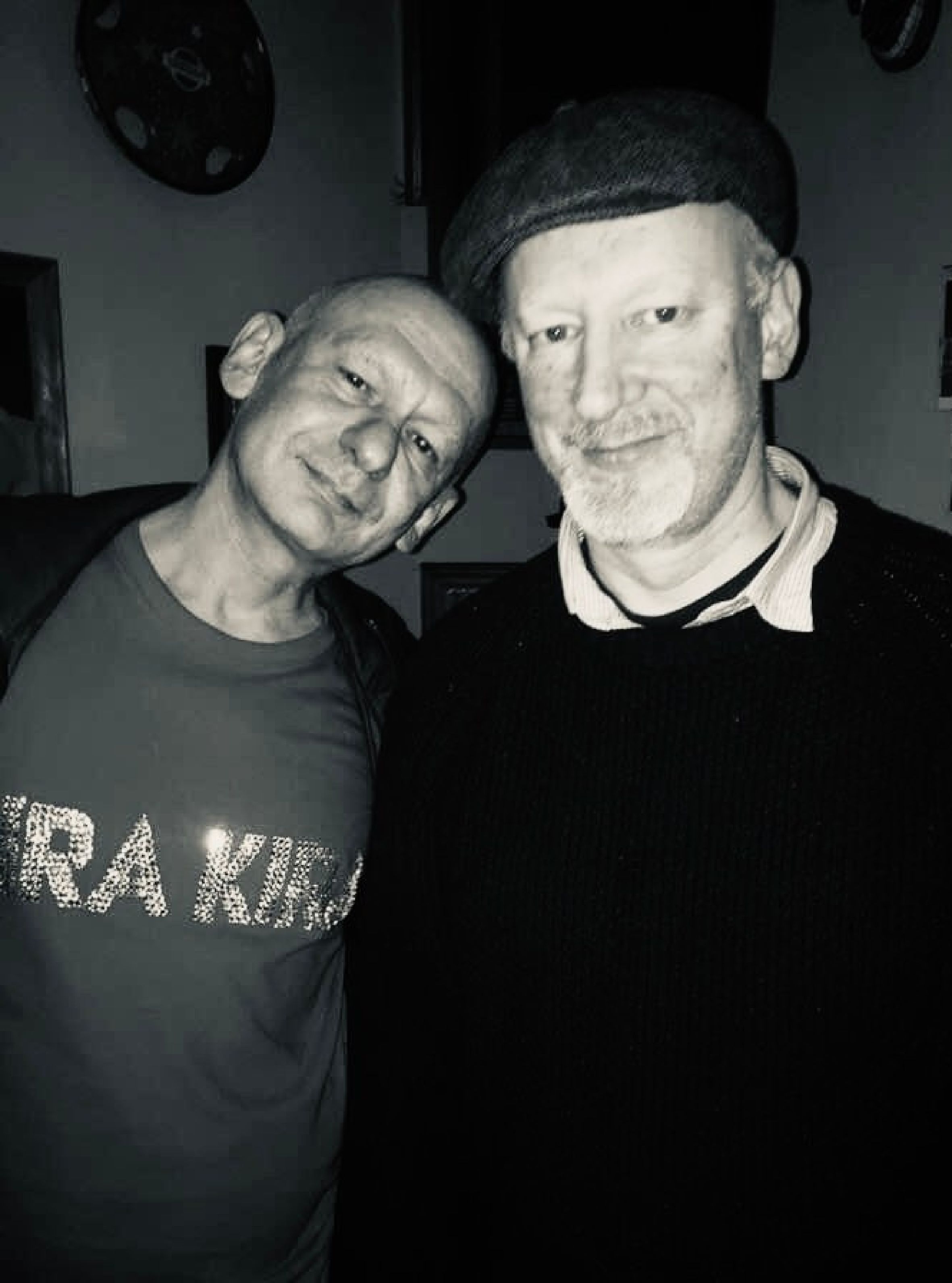 The Irresistible Force vs Ramjac Corporation 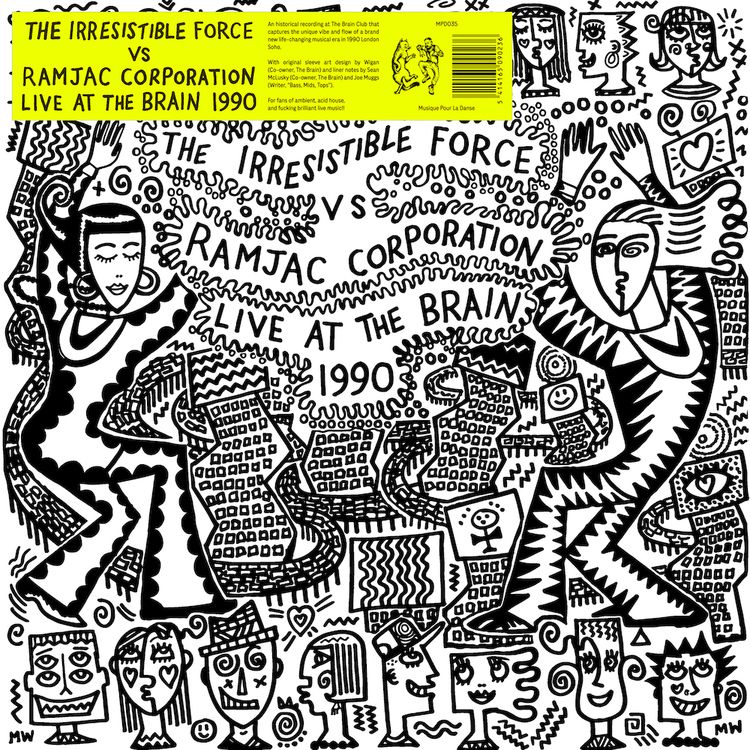 A historical live recording at The Brain Club that captures the unique vibe and flow of a brand new life-changing musical era in 1990 London Soho. Includes liner notes by The Brain club co-owner Sean McLusky, writer ("Bass, Mids, Tops") and DJ Joe Muggs and original sleeve art by the other The Brain club co-owner Mark Wigan, like you were back there.
For fans of ambient, acid house, and fucking brilliant live music!!
http://mentalgroove.ch/MPD/MPD035_Brain/Brain-video.mp4
Back in the late 80s label owner Olivier Ducret entered 11 Wardour Street in London, home of the mighty Brain Club, a gallery · club · bar owned by Sean McLusky and Mark Wigan, where many (acid) house and techno visionaries played their early live on Thursday night to less than 50 people, that was quite intimate: Orbital, Simon Lovejoy, Mr Monday, If?, Doi-Oing, Nexus 21, Funtopia, Hi-Ryze, Adamski, 808 State, Ultramarine and of course, Mixmaster Morris's Irresistible Force and Irdial's RAMJAC Corporation. The energy and the creativity was incredible, at its peak, everything was fresh, innocent, naïve, new and oh so exciting. Boundaries in genre did not exist, and everyone was welcome aboard, no superstar, no business, just pure great fun. The crowd was eclectic, you could bump into Mark Moore or Neneh Cherry while the young guns Andrew Weatherall or Steve Bicknell were spinning. This is most possibly where it all started for me & the label and this unique recording captures it all like no other, like a time capsule, impressively, and amazingly, a classic slice of British rave history unearthed via Switzerland. Just close your eyes and go back to the phuture.
shop.mentalgroove.ch
The Irresistible Force is underground legend, ambient dj, writer, critic of corporate dance business (thanks for that) and producer Mixmaster Morris. He became involved with the emerging UK acid house scene, touring with The Shamen and releasing his first and still outstanding album "Flying High" on Caspar Pound's great Rising High Records (to be reissued on WRWTFWW with that classic T-Shirt "I Think Therefore I Ambient"). He played all raves, clubs, radios and festival, all around the world, did so many mixtapes and compilations and more albums, always so enjoyable and and still is one of the most truly enthusiastic DJ around. He's currently preparing 3 new albums to be release on Ninja Tune.
mixcloud.com/mixmastermorris
Ramjac Corporation is Paul Chivers, producer, percussionist, sound artist and teacher, with first release on the cult London label Irdial Discs, one of UK's unsung electronic pioneers, known for his voltaic live shows during the heady Summer of Love in 1988 and beyond. Jamming his own flavour of sampled beats live from his Atari and Emulator, Ramjac performed at the now legendary Sunrise, Energy and Back To The Future raves and went on to tour with Orbital, The Shamen and The Irresistible Force. Ramjac went from playing from 50 to 10,000 ravers in a matter of months. In 2018 London-based record label Emotional Rescue have announced the reissue of Ramjac Corporation’s debut extended player “Cameroon Massif!” mixing a love of techno and house with dub bass and break beats into a proto-jungle swirl.
ramjac.co.uk
Sean McLusky went on to set up Brainiak Records with Tim Fielding, the legendary Live At The Brain albums, then they went to mastermind various London clubs like Love Ranch, Club UK, Sonic Mook and Mr C's The End. Today Sean McLusky runs Whitechapel Gallery in Hackney where this album release party is held on 11.03.2022. Sean wrote liners notes for this album.
whitechapelgallery.org
Mark Wigan was an influential pioneer of urban art in New York, Tokyo and London during the 1980s and 90s. Amongst other, he did the whole The Brain club visuals, as well as several records sleeves for Frankie Bones, A Guy Called Gerald and Bobby Konders. His work explores and responds to anthropology and subcultures, evoking a magical symbolism and the collective unconscious, ancient motifs and the beginning of language itself he has created a whole universe of compelling artworks. He was also involved in illustrating the London club scene. Mark drew the visuals for this album.
www.markwigan.com
This album is for Steen who what there on the night, and Louis the dancing cat.
And to all that where around there then, and somehow still are. 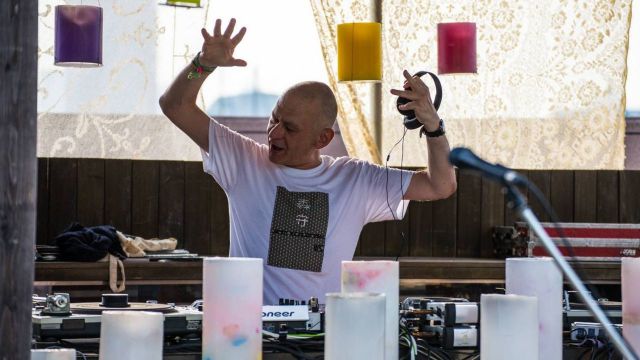